Hidden inside a Dennistoun building is a feast for the eyes; Wasps Hanson studios. Here ceramics, stained glass and drawings are just some of the treasures tucked away. But – once a year – the studios hosts an open weekend, to show the public what it has been missing.

Speaking from the event, ceramicist Eleanor Caie said: “Open weekends are a rare treat, and a lovely chance to let the public explore our working space.” 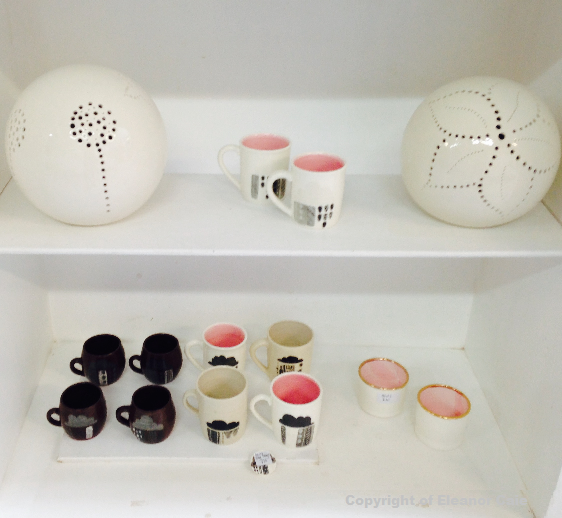 She said: “I spend a lot of time making things and developing ideas, and the Glasgow ceramics studio [at Hanson] is the best space for this kind of work.”

As well as studio work, Caie helps run an arts fare on Royal Exchange Square, showcasing her and other artists’ produce. 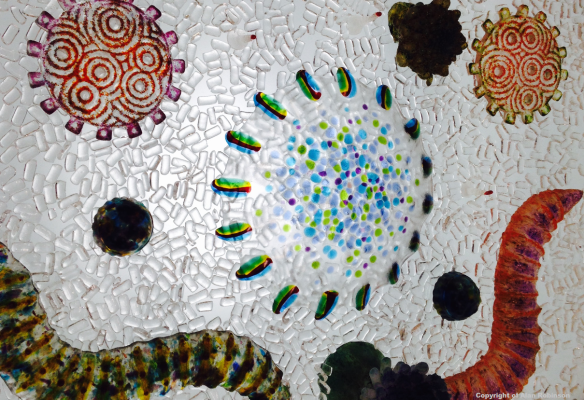 He said: “I am a full-time artist; I create work here at Hanson, but also use the space to run stained glass classes, for people interested in learning the craft. Students come as beginners, develop their skills, and often end up honing them over years.”

These skills, Robinson explained, are vital to a city renowned for its stained glass.

He said: “Glasgow is the UK’s leading stained glass city; so restorations make up about fifty per cent of my commercial work.”

The other half he listed as original wall mountings, windows and sculpture.

Robinson explained: “I have sculptures on display which I showed at an exhibition in Edinburgh, called Number, Sign and Pattern. These pieces include both fused, and cast and painted glass, with layered surfaces. The pieces explore the relationships between marks and signs, textures and patterns, images and objects.”

Another artist using glass in a different way was Alicia MacInnes. MacInnes showed functional jewellery and sculpture, made via bottle slumping and multiple firings. Tartan patterned glass pendants and bottle dishes were some of the results. 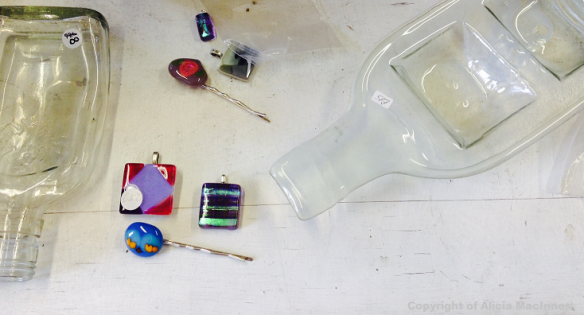 MacInnes reflected on the changes she had seen during her time at Hanson.

She said: “I originally came to Wasps Hanson about fifteen years ago, to work in the collective glass studio. Long before that the Hanson building was a tobacco factory, which was eventually turned into artists’ studios. Then – in 2001- the studios were further refurbished with Lottery funding.

“At the time they looked fantastic; since then they have worn a little around the edges, but are still a good space.”

Another long-standing resident showing at the open weekend was artist Susan Eaton. Eaton joined the studios fourteen years ago, after leaving art school.

She said: “I have always enjoyed the space here. The Hanson Studios have a huge variety of artists working across different mediums.”

Eaton’s medium of choice had recently been pencil, as she explained: “I have been focusing on drawing for the past few years. I work with fine leads and build up layers to get a dense black effect; it’s time consuming but worth it.”

She added: “The works I have on display are incomplete portraits of women, focusing on the texture of their clothing and the weight of the limbs, as opposed to the identity of the subject.”

Also focused on the human form was artist Lindsay John, who showed a series of drawings he had made in Japan, 1981. Each drawing depicted several stylised characters in motion.

He said: “I have had these drawings hidden away, and have just recently had them framed, so am showing them for the first time. They are very special to me.”

John added: “The images were made with a pen brush, common in Japan, which I used to show movement and performance. The figures are a mix of human and animal; reflecting different aspects of the human condition.”

Further anthropic thought was put into John’s screen sculpture, a fan-like object that unfolded into landscapes.

He said: “I made the screen as a gift for one of my friends who recently had a child. It can be held by an adult and shown to their child, to sooth them.  Then, as the child grows up, the screen can be a memento.”

John concluded: “The screen shows landscapes from different places in the world. Each scene has a person in it; these represent the journey that the child will go on.”

Escapism was present not only in John’s work, but throughout the Hanson studio. The open day showed how the space works to bring bespoke experiences to a diffident district.