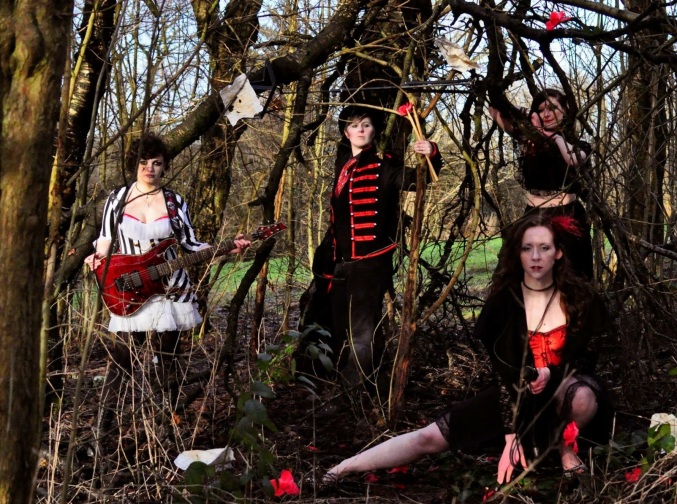 Having reached the Soundwave Music Competition final, Wolf Ruby is playing at Glasgow’s o2 ABC club (on December 9) to continue the contest.

Lead singer Siobhan Glendinning exclaimed: “We are so excited to be playing the ABC!

Sporting tutus, military blazers and goth get-up, the band is bound to stand out.

Glendinning said: “The ABC set will feature Wolf Ruby’s best live songs, including Anne Boleyn, Skip This Ad, Freefalling and – if we can squeeze in another – either Gotta Get Away from You or So Happy.”

The gig comes after months of hard work and three heat rounds.

“These things would help us out bigtime!”

Like every new act Wolf Ruby has had to balance their passion with their livelihood.

Glendinning said: “The growing culture of  voluntary gigs and pay to play is heartbreaking.

“Unsigned acts rehearse for weeks, pay for studio hire,  instruments, equipment and training just to get offered a free beer at the end of a gig; which they mostly won’t take because they are working at 6am the next morning!”

She continued: “Wolf Ruby love performing, but there’s been times in the past where we’ve taken a month off gigs to just write songs and feel good about what we do.”

Creative passion has been a cornerstone of the band since its founding at Glasgow’s Academy of Music and Sound (GAMS).

Glendinning said: “Sanjo, Claire and Sam had already been on previous courses, but I joined GAMS later, on the HNC.

“Wolf Ruby’s meeting involved a bit of a fate, as different circumstances had taken a few of us off our intended routes.”

The band started as Glendinning (the workaholic) partnered with Smith (the self-proclaimed class clown). After harmonising, the pair found a sound they loved and decided to expand the band.

Glendinning recalled: “The first person we recruited was Sam, she was hesitant, but soon felt our playing and writing gelled.

“Then we asked Claire if she would do keyboard and backing vocals. Claire brought a quirky style that lifted our grungy  sound.”

After finding their sound, the band still had to find their feet.

Glendinning explained: “Sam was struggling with a lack of self belief; Sanjo was trying to rationalise extravagant creative ideas; Claire had to prioritise different musical endeavours; and I was going into  ambitious overdrive!”

Yet, Glendinning said, the band levelled.

She added: “We practiced, we gigged and learned not to rush.

“We had a lot of bonding, fighting and soul searching to do before uniting personally and professionally.”

Since then the band has gone from strength to strength, performing at Hangarfest festival and venues like Slouch, Ivory Blacks, and Shadow Sound.

“As well as that we have gigs across Scotland, radio play, music videos, and Boudicca Records ventures coming up.”

She said: “I would tell emerging artists to stay positive. You might not be getting paid or getting treated with enough respect, but you can change that.

“Build your music and business around your goals and, most importantly, keep creating because it inspires you.”