Girls and their Mothers 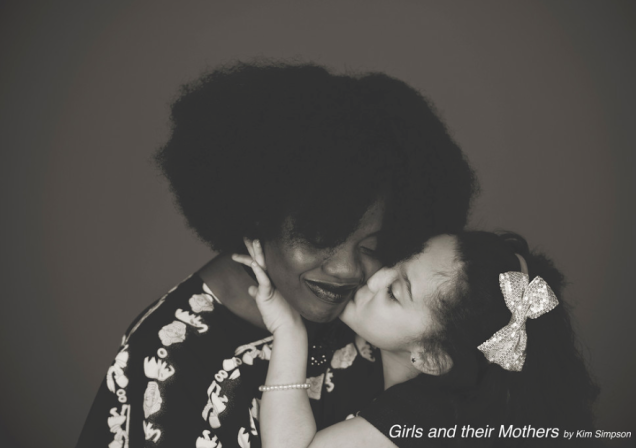 Busting the myth ‘like mother like daughter’ is Scottish photographer Kim Simpson. Showcasing in East Kilbride Central Library – from May 28 to June 30 – Simpson’s exhibition, Mothers and their Daughters, celebrates individuality.

She said: “I have been inspired by the experiences of raising my daughter, Lamaya, who is of mixed race. She has been raised in the same Scottish town that I grew up in, and while our experiences are largely similar there has unfortunately also been some negativity due to the colour of her skin.”

Simpson explained that as Lamaya grew her peers became more conscious of image and how hers differed to their own.

Simpson added: “My daughter had a particularly difficult school year in Primary 7, when a class full of children who she had been with for the last six years seemed to view her differently all of a sudden.

“I found it extremely hard to get the school to take action on this and felt that my concerns were being brushed off.”

Being white from a largely Caucasian town, Simpson saw there was apathy for the challenges faced by mixed race families. Realising others were also experiencing these frustrations, Simpson used her art to connect individual’s narratives.

She said: “Spending time with girls and women of mixed race who had grown up experiencing what my daughter had, and flourishing in spite of it, was inspirational.”

Simpson photographed sixteen families all together, resulting in a total of 48 images.

She recalled: “There were many stories shared, both positive and negative. People who lived pockets of the same city – some only minutes apart – had huge differences in social interactions with their local areas.”

Recognising the differences in maternal relationships, as well as the common challenges, Simpson’s work struck a chord with many.

She said: “I am overwhelmed at the amount of support this project has received from its infancy to exhibition planning. I am pleased to have created something that has been so well received.”

She said: “Co-ordinating a solo touring exhibition has been a huge learning curve and great experience. I am now able to respond to the feedback gained during my exhibitions; allowing me to think bigger by incorporating talks and community projects in to my work. I am also looking to expand my existing projects with a real national significance.”

This is no mean feat, considering Simpson juggles exhibitions with paid work and parenting. Despite this challenge, she explained motherhood was what led her back to her passion for art.

Simpson said: “While most kids want to grow up to be a vet or a police officer, I wanted to be a wildlife photographer and work with David Attenborough. I also used to love sketching and painting, but never saw art as a viable career option.

“However I came back to art as an adult, during some time out of work when my daughter was born.”

While on this break Simpson took up painting again, working on leather and 3D objects. She began painting more intricate designs on shoes, a skill which eventually saw her win Best Customizing Designer at the UK Urban Fashion Awards, in 2007.

Despite this passion for paint, Simpson yearned to focus on photography.

She recalled: “I began spending more and more time considering themed images for each of my shoe designs, until eventually I was painting to match photo-shoot ideas. It was at this point I listened to my inner child and pursued photography full time.”

Simpson went on to study photography at City of Glasgow College, staying for four years, and earning a First Class honours degree.

She said: “The final two years of study saw me hone an interest in to the Visual Norm.”

This theme continues to be seen in Simpson’s Mothers and their Daughters exhibition, as well as providing inspiration for her next project.

She concluded: “I will be continuing this theme through an exhibition of new work, at the Dysfunction Gallery, in September 2016. This work will then be included in Glasgow’s Black History Month exhibition, during October.”