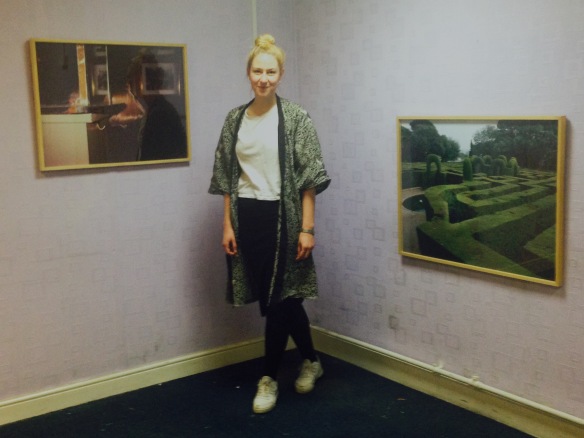 Open House Artist Tine Bek said: “The festival involved almost 200 artists, whose work was spread out throughout town, in houses and public spaces; to make it more accessible.”

The festival provided a platform for (emerging and established) artists to open their practices, and sometimes homes, to new audiences. By removing art from conventional spaces and embedding it in infrastructure Open House gave a second perspective of Glasgow.

Turning heads in the Savoy Centre was photographer Tine Bek. She and fellow artist, Scott Caruth, made the ‘Twofold’ exhibition in Savoy Centre disused units.

Bek explained: “The exhibition was collaboration between myself and Scott; we arranged our space together, but as two separate shows with the common link of travel.”

In Twofold Bek and Caruth presented work developed during artist residencies abroad. Bek was ‘artist in residence’ in Buenos Aires, and Caruth was one in Modena.

Caruth mused on the legacy of the 70s Italian movement ‘Autonomia’, while Bek examined the Baroque period and its influence.

She said: “This is a selection of images from a book I am making called the Barok. It views the Barok as a state of mind, as opposed to a just time in history. The work examines human interactions; the way people deal with space and excess.”

Bek describes the baroque as both a period in design and as a philosophy on duality. Bek’s work showed this conflating illusion and reality, light and dark and time and space.

Bek said: “Exhibiting in a Savoy Centre unit has been awkward, but in a good way. Working in unconventional space challenged me as an artist, and opened my work to people who wouldn’t usually see it.”

Opportunity has also arisen in her partnership with Caruth.

Bek explained: “Scott and I have been talking about working together for about three years, having both graduated from Glasgow School of Art (GSA) Fine Art photography. It has been great to finally collaborate and bounce ideas off each other.”

She added: “We are thinking about working together in the future, and possibly making a book of photography.”

This natural development of talent was the founding principle of Glasgow Open House (GOH) an artist-led, not-for-profit group, established by GSA alumna Amalie Silvani-Jones, in 2013.

Since its founding, GOH has helped grassroots artists circulate their work. This ethos was then enshrined in the Glasgow Open House Art Festival 2014.

The 2014 festival showcased 80 artists, however a year later the festival had grown and included new ‘Art Walks’, touring its exhibitions. Specially commissioned flags were made (in partnership with Project Ability and COLOUR HOTEL) to adorn Glasgow buildings, pinpointing the art.

Artist work and details of the 2015 festival can be viewed at the Glasgow Open House Art Festival website.