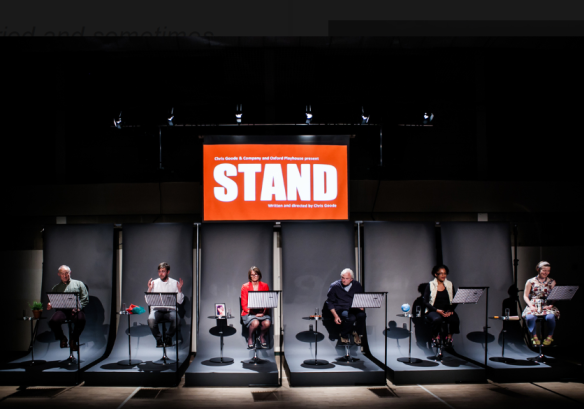 Promising to elevate audiences, STAND has been revealed as the Traverse Theatre’s final Spring Production. The critically acclaimed drama sees Chris Goode & Company return to the stage (from June 4 – 6) with stories of everyday heroism.

Leading this narrative are six actors, recounting tales of real people’s rebellions. Among these actors will be director Chris Goode himself, who joins the cast in its Edinburgh bill.

A veteran of the Traverse stage, Goode previously collaborated with the theatre during his 2014 Fringe production Men in the Cities, and his 2012 production Monkey Bars.

Heralding his return, Traverse Theatre Artistic Director, Orla O’Loughlin, said: “After the great success of Monkey Bars and Men in the Cities, it’s wonderful to welcome Chris Goode back to the Traverse with STAND. It’s really exciting to see his latest project come to Edinburgh, and to have Chris back in the building.

“The show is about the power of standing up for what you believe in, and I can’t think of a more appropriate venue than the Traverse to do that.”

From its bold beginnings (in a disused brothel) the Traverse theatre has staged productions that brake taboo; an ethos fitting with the plot of STAND, as Chris Goode & Company Critic in Residence, Maddy Costa, explained.

She said: “One of the women in Stand talks about super-gluing her hands to an office chair at a protest. Another recalls walking on the motorway when she was a teenager, to demonstrate her belief that the world belongs to all.

“One of the men describes denouncing BP’s sponsorship of the Royal Shakespeare Company, by rushing on to the stage and calling on people to rip its logo out of their programme.”

With this heady action it is no surprise critics have praised STAND. Lyn Gardner of the Guardian said the drama acted as ‘reminder that small gestures matter.’

While Matt Trueman of What’s On Stage said: “Goode does this better than anyone. He takes an ostensibly simple idea – taking a stand – and reveals all its hidden depths.”

STAND will be shown in in T1; with tickets £16 full price, £13 standard concession and £8 other concession.