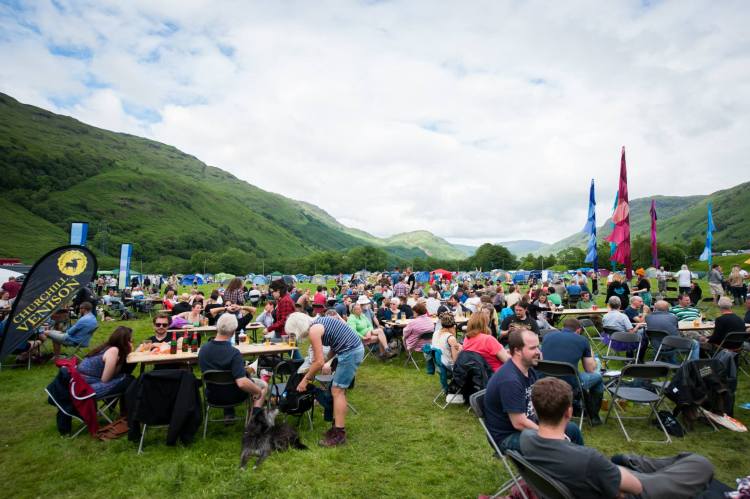 Breaking the cycle of clichéd festivals, Fyne Fest returns for its sixth year of beats, beer and bites.

This is a long way from its humble roots, as Festival Marketing Manager Chris Black explained.

He said: “Fyne Fest started as a bit of a party around Fyne Ales brewery; celebrating its new and bestselling beers. However, as time passed, it has grown and become a full scale festival with music, entertainment, food and drink.

“The festival is held beside Glen Fyne River, in a site surrounded by hills. It is really stunning; there is nothing like it.”

New features of Fyne Fest 2015 include a Tap Stage in the brewery courtyard, which will host chilled music and a Fyne Fest Pub Quiz.

As well as this, 2015 sees the scenic Walker’s Bar open longer hours, with a bigger area, acoustic music, and food.

Foodies can also catch a break at Fyne Fest’s many stalls.

Black said: “The festival site will have eight different butchers selling their wares, as well as stalls with seafood fresh from Glen Fyne”.

And to compliment this food, craft beer tastings are being held in the Wee Tent (a new sheltered seating area).

Black explained: “Fyne Ales will be showcasing its world-class beers at Fyne Fest; however it will also be working with staff from Good Spirits Glasgow, to run a cocktail bar within the site.

“The cocktail bar is new to Fyne Fest 2015; it will feature an amazing list of drinks all served in a cool setting.”

Once refreshed, guests can dance the weekend away to the many featured acts.

Black said: “On Friday night we have a ska band called Bombskare, who are returning to the festival for their third year running. Bombskare have always been such a massive hit that we had to ask them back for 2015.

“Then we have a Glasgow band called Federation of Disco Pimp playing on Saturday night; they are really funky and bound to get everyone dancing.”

Dancing can continue on Sunday, when the acoustic area hosts the under-16s- jam, handing the stage to young musicians.

Any hangovers the music fails to soothe can be tackled at Zen in the Glen, where Glasgow charity Yogability will run free yoga and meditation sessions.

Further R&R can be gained at Sephora Health and Beauty’s stand, where massages will pamper adults and face-painting amuse children.

Black said: “Fyne Fest welcomes guests of all ages; kids under 16 go free, and this year we have special entertainment for them.

“The atmosphere is great; everyone brings their kids and dogs, and just has a good time. The vibe is really friendly and there is never any trouble; this is something the festival has become famous for.”

He added: “Fyne Fest has a reputation as one of the best small festivals in the county; last year 99.5% of its patrons said they would return. This year is testament to that because we have sold out.”

For information on this or next year’s festival, visit the Fyne Fest website.