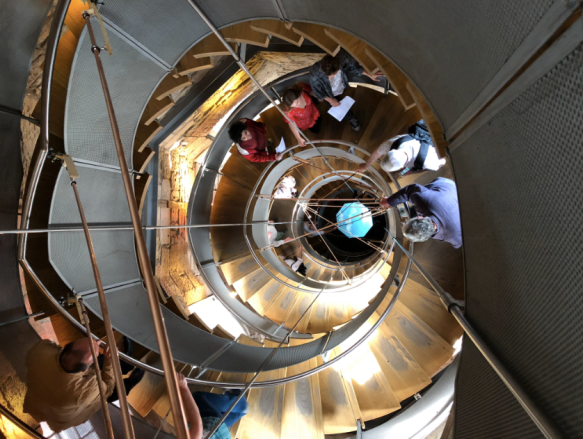 Reimagining the Glasgow of Charles Rennie Mackintosh is the audio-visual installation Visaurihelix, showcasing in The Lighthouse, Glasgow, until 2 January 2019.

Visaurihelix Artist, Dr Louise Harris explained the exhibition title, saying: “It is a made up word, used to summarise the installation, its first part represents visuals, auri is related to sound and helix is related to the helical staircase of The Lighthouse.

The Lighthouse had commissioned the piece, by sending out a brief for a work that would both fit its unique space and celebrate the 150-year legacy of Charles Rennie Mackintosh.

Harris said:“I have been obsessed with Mackintosh design and architecture since I was a child, and I am also obsessed with spiral staircases, so it was a pretty perfect combination for me; so I applied to the brief, and there you go!”

Harris used her expertise in audio-visual art to compile soundscapes from Charles Rennie Mackintosh buildings, before combining and presenting them in a new way. This included using speakers, on The Lighthouse staircase, to vertically play sound recorded from five Rennie Mackintosh sites.

Harris explained: “The majority of the pitched material in the work is mapped from those sites; I built algorithmic software patches that took the site designs and translated them to changes in pitch over time, and that made the electronic backbone of the work.”

She added: “The other audio material is sound that has been recorded in those five spaces and has been combined into the work.”

The work was then made interactive by entwining The Lighthouse staircase in a giant glockenspiel construction, the angles of which mimicked patterns of Charles Rennie Mackintosh design, allowing visitors to create their own sounds.

Harris said:“When I was working in the studio I had to make guesses as to how noises would sound when travelling vertically, not horizontally, so that was quite challenging, but it was a good challenge, it made me think more about how to work with multi-speaker formats in more detail.”

She added:“I was quite surprised how well the speakers worked together, but also how the glockenspiel element turned out.” 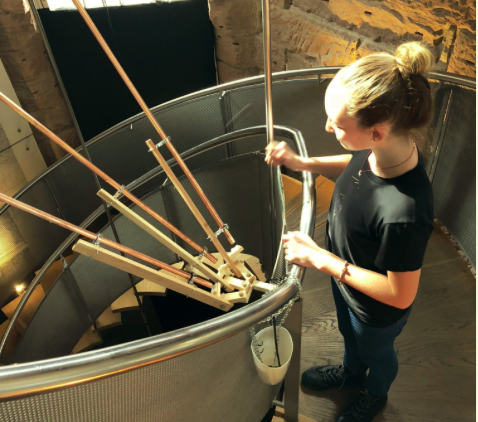 While Harris knew the exhibition space would be a challenging part of the project, an unexpected challenge arose when the Glasgow School of Art suffered a fire.

Harris said:“I was planning to record sounds from the Art School and include them as one of the building soundscapes in the installation; but the fire happened literally a couple of days before I was due to go in and collect the material, so it was quite poignant.”

Despite being unable to capture soundscapes from the Art School, Harris hopes that Visaurihelix will allow people to reflect on all of Rennie Mackintosh’s work.

She said: “I hope this exhibition’s visitors have enjoyed engaging with different Mackintosh spaces, from different places in the city, and so it acts as a tribute to the Art School as well.”

She explained: “I am a relative new comer to Glasgow, I have only lived here for around four or five years, but the Lighthouse and the Mackintosh buildings and galleries were some of the first things that I explored when I got here.”

Harris moved to Glasgow to take up a position at Glasgow University.

She said: “When I got my job in Glasgow, my title was Lecturer in Sound and Audio Visual Practices, and that type of role was unheard of at the time, but these days it is much more common.

“The audio-visual art scene has changed hugely in the last 10 years or so, audio-visual work has become more prominent in festivals and galleries.”

Despite this, Harris accepts that the definition of audio-visual art can still be confusing.

To explore Harris’ audio-visual art in other venues, you can see her exhibition, Alocas, in the Stephen Lawrence Gallery, in Greenwich London, from November 2018 until January 2019.

Harris summarised: “Alocas involves a dual screen speaker and audio-visual work. The audience is situated in the middle of two large screens, so it is a very immersive, physical and participatory experience.” 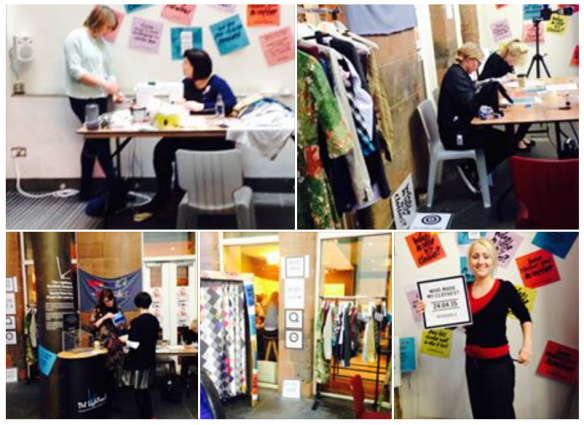 This is one of many incidents that continue to haunt fashion supply chains.

In 2013, International Labour Organization (ILO) estimated accidents and diseases at work caused two million fatalities every year. ILO also forecast around 40% of the world’s workers earn under £1.30 a day, and over 50% lacked secure employment.

“The sad fact is many workers in the garment industry are living in poverty, even though they have paid jobs.”

In 2009, the Ethical Trading Initiative reported that 48% of its corporate members’ weren’t paying workers in full. That year the Fair Labor Association showed 58% of its audited suppliers were underpaying wages.

She added: “We hope people will start to ask why their garments are so cheap and think more about what they are buying.

“We wanted to encourage people to ask ‘who made my clothes?’”

This question was carried on placards and pins that campaigners distributed on Buchanan Street (Glasgow). The ‘flash mob’ asked shoppers about their buying habits and invited them to the Lighthouse workshop.

Taylor said: “Fashion Revolution was at the Lighthouse to commemorate the Rana Plaza disaster and promote ethical fashion.

“We had a ‘fashion tardis’ changing room, where people could turn their clothes inside out, then get their photo taken, showing their labels and asking social media #whomademyclothes?”

The campaign encouraged fashion brands to share their factories’ locations and photos. It was supported by events held across 71 countries.

She said: “I ran the upcycling workshop as part of Fashion Revolution Day. The workshop was quite busy and there were a lot of tourist stopping by, wanting to know what it was all about.

“Some of the tourists hadn’t heard of the Rana Plaza disaster, so it was good way to raise awareness.”

She said: “I came along to fashion Revolution Day to help my friend Jen campaign, but I ended up taking part in the upcycling workshop. I worked with Iona to transform an old t-shirt into a dress.”

Barker added: “I would encourage people to think twice before they throw things out. A piece of worn clothing can be changed into something cool and new.

“If people want to upcycle clothes, but aren’t very good with a sewing machine, they can always use fabric glue and paint!

“Upcycling newbies can also get help in haberdashery shops. Glasgow has a lot of great material shops and the staff are all very friendly.”

Barker explained that clothes can be recycled via charity shops or ‘swap parties’ (where guests exchange unwanted garments). She encouraged shoppers to look for ‘swapping’ events in their area.

Concluding, Taylor added that Future Fashion Revolution Events, such as documentary screenings, will be advertised on the group’s website.